Tonight is the fall finale for This is Us as we’re missing it already. Our gallery was updated with promotional images of Justin as Kevin Pearson, while, accordingly to the episode’s synopsis, he arrives at the Ville his father served in. Check it: 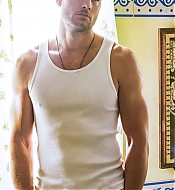 First of all, Happy Thanksgiving to all who celebrate it!

I’ve prepared a very special update for today. Our gallery has been filled with over 1500 HQ pictures from Passions, Justin’s debut project. He starred as Nicholas Foxworth “Fox” Crane from 2002 until his departure in 2006, when he headed to Smallville, to play our beloved Oliver Queen.

You will find lots of episodic stills and some amazing promotional images from 2003 to 2006. Enjoy!
Ps: Huge thanks to my friend Ashley (go visit her amazing site for Ben Feldman) for helping me through the nightmare on organizing all this stuff.

I tried to open Justin Hartley Connection the most complete I could, but there was still some things missed, which I am currently working on. One of those missing things was an episode Justin did back in 2007 to Cold Case, one of my favourite shows back then, starred by Kathryn Morris, Danny Pino and Jeremy Ratchford. This happens to be the most hateful character Justin has played to date – for me, at least.

In 2015 he attended a Con in Brazil and someone asked about it, on how was to play such a terrible part. Justin said that Hollywood has the responsibility to show the horrible, telling stories that need to be told so people are aware. He said having thought a lot about his daughter and his mother to keep his head in place while playing someone you’re not supposed to like.

I was finally able to find the episode to take screen captures. Sadly, the show can’t be found in DVD, VOD or any high quality source so be aware the caps aren’t in the best quality. Enjoy!

This is Us: “The Beginning is the End is the Beginning” – Fall Finale Promo

We’re in that time of the year in which you complain “… but you just arrived!” Yeah, the fall finale is upon us and NBC released a promo, that aired last night right after the episode. Watch it:

The episode, titled The Beginning is the End is the Beginning has the following synopsis:

Kevin arrives at the Ville his father served in. Kate pursues a new opportunity. Randall debates Councilman Solomon Brown. In the past, Jack struggles to get through to his brother.

You can also find in our gallery screen captures of Kevin scenes during the Pearson’s Thanksgiving. That was cute!

Hello! Here are we again catching up with some more additional pictures from old public appearances. This time, updates comes for events from 2010-2015. The Young and The Restless fans, that’s your turn!
Also, some pictures of Justin on set of Emily Owens back in 2012 is also added. Enjoy!

Hello! So here we are, again, with a new batch of old appearance pictures, still from the time Justin was promoting Passions. This time, pictures covers events from 2005-2008. I have added over 280 new pictures, you can follow the links below to be directed to the updated albums. Links with the *new mark belong to events we still didn’t have in our gallery. Enjoy!

I’ve been collecting Justin photos for quite a while and got in my hands some really rare old photos from the earlier 2000s, back when he was doing Passions. I will be uploading them from times to times and, to start, events Justin attended between 2002/2004 are now added.

While we’re at it, how about figure out where is the location of the fountain of youth Justin has been using. Enjoy the new pics!

This is Us: “Sometimes” Screen Captures

Our gallery was updated with screen captures from last night’s episode, Sometimes.

Justin visited last night the Late Late Show with James Corden, to talk about the most recent This is Us episode, aired last night. Check in our gallery screen captures of his interview, also some excerpts in the players below:

Justin at the NASCAR Cup Series

If you follow us on twitter, you might seen we’ve been sharing pictures of Justin attending the NASCAR cup series this weekend. He posted himself a video, on his Instagram Stories, right from the venue:

Now we have – finally – some official pictures added in our gallery. Enjoy!

Welcome to Justin Hartley Connection, your newest source on actor Justin Hartley. Currently on air with This is Us, Justin is also known for his roles on shows like Revenge, Smallville and his runs on soap operas like The Young and The Restless and Passions. We aim to provide you with the latest news, high quality photos and media on Justin. Check out the site and please come back soon.
Follow @HartleyConnect

Follows a unique ensemble, as their paths cross and their life stories interwine in curious ways, from sharing the same birthday, to so much more than anyone would expect.

Visit our photo gallery currently at 43.000+ photos and growing!

Justin Hartley Connection is a non-profit fansite. We are in no way affiliated with Mr Hartley, his management, agency and/or friends and family. All graphics and original content are being used under the Fair Copyright Law 107 and belong toJustin-Hartley.net. Other images and text belong to their respective owners. No copyright infringement intended. This is an unofficial website.

This website uses cookies to improve your experience while you navigate through the website. Out of these, the cookies that are categorized as necessary are stored on your browser as they are essential for the working of basic functionalities of the website. We also use third-party cookies that help us analyze and understand how you use this website. These cookies will be stored in your browser only with your consent. You also have the option to opt-out of these cookies. But opting out of some of these cookies may affect your browsing experience.
Necessary Always Enabled
Necessary cookies are absolutely essential for the website to function properly. This category only includes cookies that ensures basic functionalities and security features of the website. These cookies do not store any personal information.
Non-necessary
Any cookies that may not be particularly necessary for the website to function and is used specifically to collect user personal data via analytics, ads, other embedded contents are termed as non-necessary cookies. It is mandatory to procure user consent prior to running these cookies on your website.
SAVE & ACCEPT